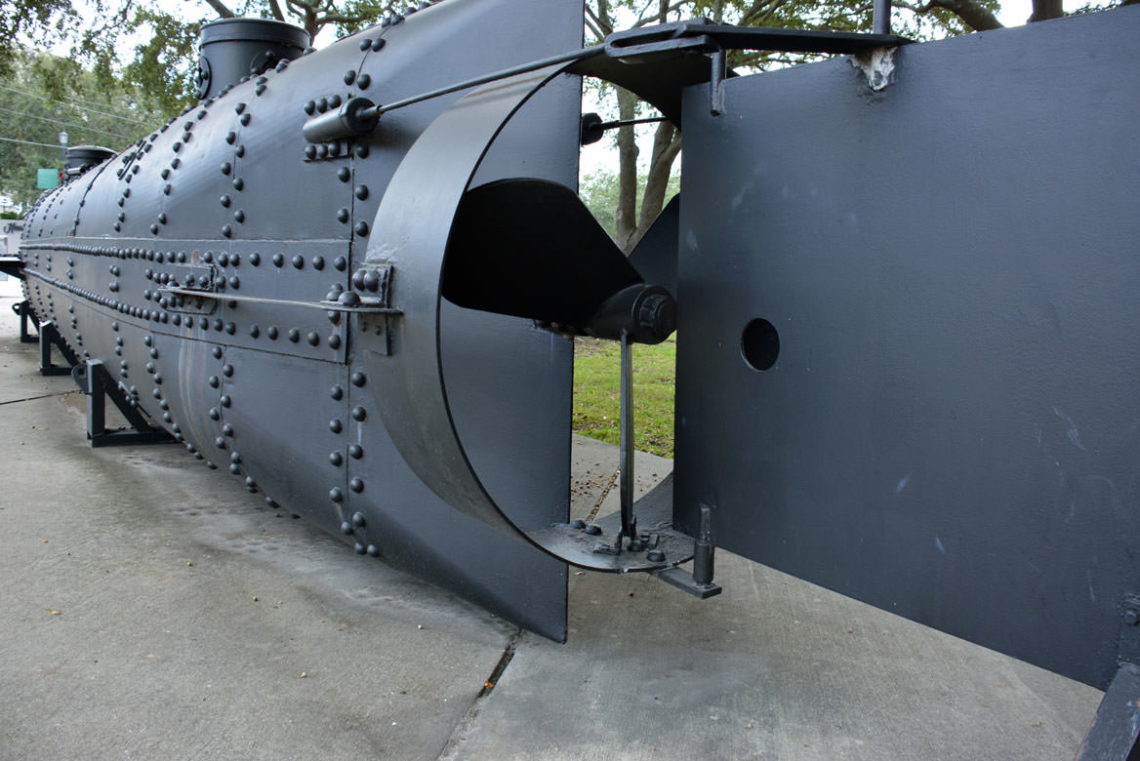 Today, weekend visitors can visit the working library where the Hunley lives, and where scientists are diligently working to find out more about this history-making craft, such as how it operated, how it was constructed, and most important and still relatively unknown, how it met its end.

The H.L. Hunley was not the first experimental vessel that was being built during the war, but clearly, it would become one of the most famous. Desperate to find a way to break the Union blockade which was starving the southern states, engineer Horace Lawson Hunley began privately constructing and testing the vessel in early 1863, after the loss of two unsuccessful submarines, the Pioneer in New Orleans, and the Americans Diver in the Mobile Bay.

The Hunley was known as the "fish boat," the "fish torpedo boat," and the simpler "porpoise," and the design entailed a short and stubby vessel that measured just 40' feet long. The craft was powered by a hand-cranked propeller which required 7 men to operate, and was equipped by ballast tanks on either end that could be flooded by valves or by hand, as well as two watertight hatches located at the front and the top of the vessel, respectively. At just 14" x 15 ¾", the small hatches made entering and exiting the submarine very difficult, and the small haul, which was just over 4' feet high, led to some very claustrophobic quarters. Only 8 men could somewhat-comfortably fit in the vessel, including the aforementioned 7 propeller operators, and an eighth man to steer the submarine itself

The Hunley was tested in Alabama on the Mobile River soon after it was constructed, and once it had constructed a successful demonstration of attacking a test coal floatboat, it was immediately seized by the Confederate Army and shipped to the Charleston Harbor, where the blockade ships were at their thickest and most devastating.

Testing commenced in Charleston in August 1963, and shortly after, five members of an inaugural crew were drowned after a ship officer accidentally caused the strange new craft to dive while the hatches were still open. A second crew was assigned to the submarine, and two months later, a similar disaster struck during the ongoing training, killing all 8 members of the Confederate crew inside.

Once again, the submarine itself was saved, and a new commander, Lt. George Dixon who was well aware of the vessel's deadly reputation, was assigned to the ship. With a brave group of volunteers, Dixon submerged into the harbor and led an attack on the USS Housatonic, a Union blockade ship that was lurking just three miles away from neighboring Fort Sumter. The captain of the ship, John Vessel, only noticed a shadow approaching the boat that he assumed was a porpoise until it approached closer and closer, and the captain realized he was dealing with a revolutionary new weapon.

Dixon stayed under the water as the submarine approached the edge of the boat, close enough to strike the ship with a spar torpedo that was attached to a 16' foot rod. Once the torpedo and the ship connected, the 135 pounds of gunpowder exploded, destroying the Housatonic within minutes. (Most of the crew survived, however, by retreating in lifeboats, or simply clinging to the rafters which stood above the water in Charleston Harbor's shallow 27' foot depths.) The HL Hunley had cemented its legacy as the first submarine in history to effectively destroy a warship.

Ironically enough, however, while the Housatonic lost just 5 crew members, the Hunley lost its entire 8 man crew, as at some point after the ship was destroyed, the submarine dipped back under the water, never to resurface again of its own free will.

That could have easily been the end of the story for the HL Hunley, but miraculously, the vessel was discovered again in 1995 by bestselling author Clive Cussler and his National Underwater Marine Agency, which had been searching for the vessel for 15 years. Located 15 miles off the coast of Sullivan's Island at the bottom of the ocean, covered by piles of silt, the discovery was considered one of the most important American underwater archaeological finds of all time, and careful plans were made to excavate the Hunley and learn more about the remarkable original submarine.

The biggest question for scientists, which still remains relatively unsolved, was why the submarine sank so soon after its successful destruction of the Housatonic. The question has lingered after years of study, but recent 2013 discoveries suggest that the torpedo, which was connected directly to the spar, would have detonated less than 20 feet away from the Hunley itself, which could have easily damaged and destroyed the submarine, while knocking the crew unconscious.

Today, the recovered vessel, or what remains of it, is carefully located in a laboratory bordering the Charleston Harbor and a number of diving centers and shipping yards on Supply Street.The Friends of the Hunley, an organization that helps fund the ongoing research, is located nearby and provides plenty of information and press releases on new discoveries as they occur on their website, http://www.hunley.org/.

The Friends of the Hunley organization also conducts tours of the laboratory site, which includes the Hunley submarine in its 90,000 gallon conservation tank, full-scale models of the Hunley's submarine predecessors, and Artifacts excavated from inside the vessel. Visitors are especially astonished by the submarine replicas, which are barely large enough to contain one man, (let alone 8), and which can be "boarded" by site patrons who want to experience the claustrophobic quarters for themselves.

Tours of the HL Hunley are available on weekends only, on Saturdays from 10:00 a.m. until 5:00 p.m., and Sundays from 12:00 p.m. until 5:00 p.m. (This light schedule ensures that the scientists working full time at the lab are not disturbed during their weekday research.) Tickets that are ordered in advance run around $12.00 per person and can be purchased online at http://www.etix.com, or by calling 1-877-448-6539 (1-877-4HUNLEY). Walk-in tickets are also available on a limited first come, first serve basis.

The HL Hunley marks an incredible chapter in Charleston's history - and on a broader scale, American, maritime, and military history as well. The skeletal remains of the vessel itself, combined with the full-scale models of the Hunley's contemporaries, makes this unique historic site an incredible attraction that is sure to wow weekend visitors of all interests. With a rich legacy that is steeped in both American innovation and enduring mystery, the Hunley is sure to be a unique Charleston historical site that visitors will never forget. Fireworks for Freedom Show on the...

Listen to a concert and watch the 4th of July fireworks show from your own privately guided Cruisin Tiki. ...

This is a completely self-guided adventure! About Whether you're a curious naturalist, history nerd, love picking up shells, looking for Megalodon teeth...